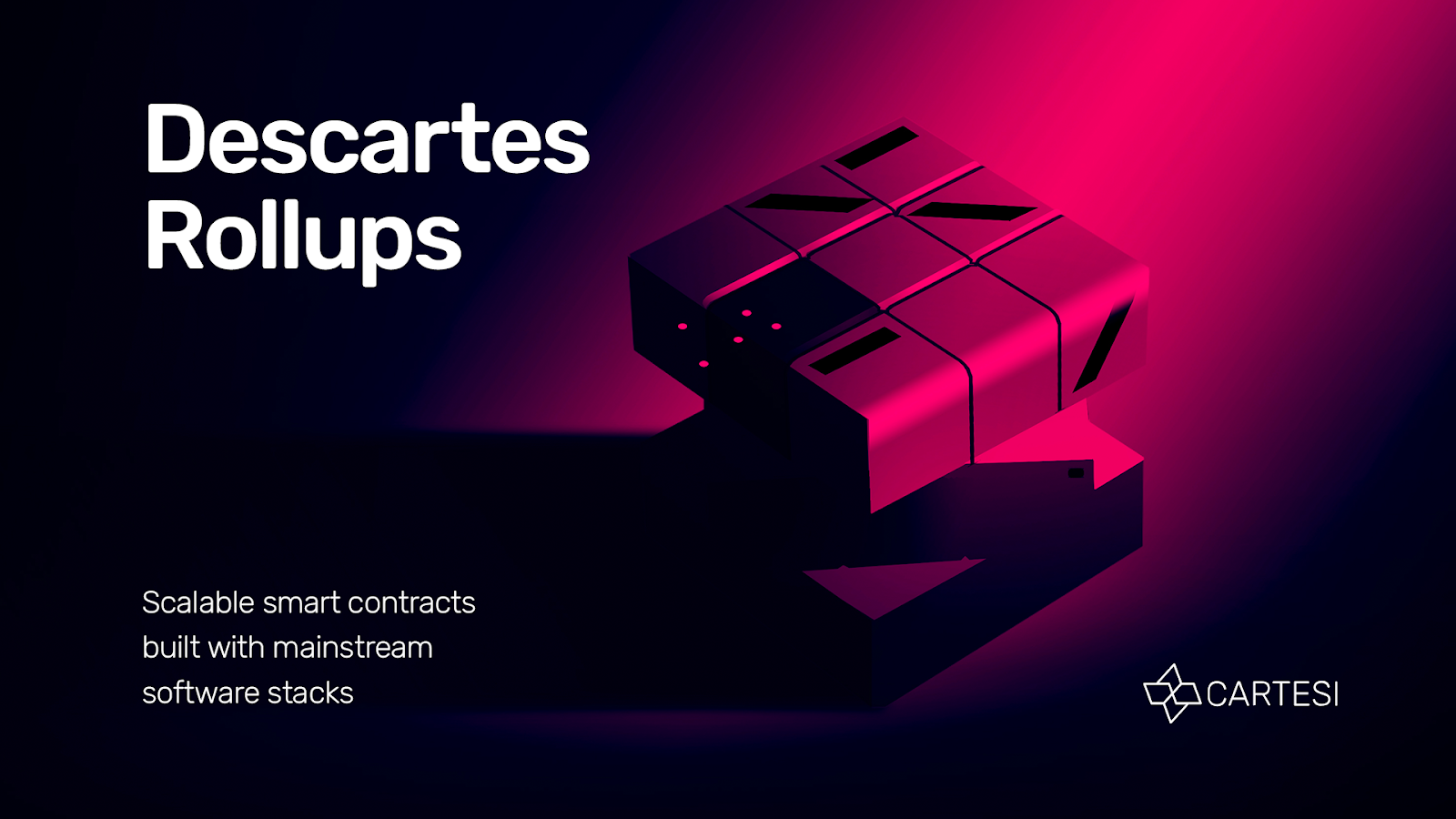 Cartesi is a layer-2 platform for the development and deployment of easy, scalable, and cost-efficient decentralized applications (dApps), closer to what we experience with regular apps. Cartesi is unique in that it bridges a familiar Linux development environment and blockchains like Ethereum, allowing developers to build their dApps and execute complex processing limitlessly off-chain without compromising on-chain decentralization and security.

The latest stage in Cartesi’s roadmap introduces Descartes Rollups, defeating the scalability issues of Ethereum, with million-fold computational gains while preserving the strong security guarantees of the blockchain and clearing the limitation and high fee barriers to broader adoption.

Rollups are a recent development presenting a more promising approach to the scalability, performance, and high gas fee issues on Ethereum than earlier layer-2 proposals by solving the problem of data availability in other designs. Transactions are aggregated (rolled up) and more cheaply submitted in batches inside a smart contract on Ethereum than they would be as regular blockchain transactions, while the bulk of the computational load goes off-chain.

How Do Optimistic Rollups Work?

Users of an Optimistic Rollup application initially deposit their assets on a particular smart contract on layer-1, known as a portal, providing an initial state and funds on layer-2. Once done, they can begin to send messages to the layer-2 contract, with the layer-2 contract state reflected and finalized on layer-1 from time to time with a redistribution of tokens among the involved users.

To achieve this, a validator node places a state claim on-chain, with the involved parties remaining “optimistic” in hoping that claim is true. When the claim is placed, a challenging period starts providing time for any other validator node to verify it and send a “fraud proof” on layer-1 if there is a disagreement. If no challenges are submitted by validators, the blockchain takes the original claim as finalized. If a fraud-proof is submitted, the blockchain adjudicates the dispute and ensures the correct claim is unequivocally finalized on-chain.

Cartesi’s Descartes Rollups adds an interactive dispute resolution variant to the challenge process where the blockchain mediates a “verification game” between the claimer and challenger nodes until it finally reveals one as deceitful. This allows for immense scalability gains as dApp specific sets of validators can execute heavy computational tasks for that dApp, rather than every layer-1 node needing to verify the transactions of every dApp. As such, moving smart contracts to layer-2 with Optimistic Rollups is like having dApp specific layer-2 shards.

Descartes Rollups contributes to the pressing scalability issues that hamper smart contract platforms like Ethereum right now, delivering off-chain computational scaling without loss of security guarantees that would be impossible on-chain. While that alone is useful, integration with the Cartesi Machine takes that a step further, providing a unique advantage that is potentially game-changing for blockchain development.

The Cartesi Machine is a virtual machine inside nodes running distributed Linux, managing the inputs and outputs between the on-chain and off-chain environments. With Cartesi’s Descartes Rollups, smart contracts can run off-chain on Cartesi Machines. As these support Linux, developers can also dispense with the Solidity programming language for implementing smart contracts on Ethereum and the limitations of the Ethereum Virtual Machine to create smart contracts with mainstream software stacks. This opens up a new world of possibilities for the first time, delivering an entire operating system for smart contracts and creating something much closer to a decentralized world computer.