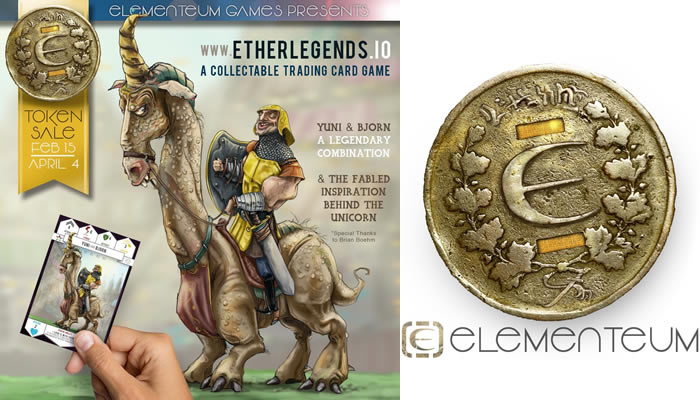 Many people gaze at the concept of a decentralised public ledger (namely, the blockchain) as a means to revolutionise the world in a way that goes far beyond its widespread use as a platform over which companies can develop and release cryptocurrencies. Going far beyond its known use as a transaction record for Bitcoin and altcoins, the blockchain has the potential to surpass expectations and modernise more than just the economy.

And, in this case, we are talking about gaming.

Elementeum Games offers a new gaming platform featuring its first RPG, Ether Legends, expected to release soon. Ether Legends game play is using blockchain technology (and the smart contracts allowed by the Ethereum platform) with functioning trading cards and digital assets associated with the game all secured by the blockchain.

With this, Ehter Legends has effectively created an ecosystem where gamers can procure full ownership of the digital content contributed and earned in games, thanks to the decentralised nature of platforms built over a blockchain.

Ether Legends has constructed a shared environment where both physical and digital gaming can coexist simultaneously. The game will be “divided” in two different areas, a physical trading cards game, where players can purchase their cards the same way they have done so until now, and the digital platform, where everything will be done through governing of smart contracts.

In having a physical trading card game as part of this release, players can compete and play with their friends and family, enjoying the traditional experience that comes with regular gaming. However, in the digital platform, gamers will be able to compete with players from around the world, for the chance to earn rewards and have true immutable ownership of digital content.

And, to add more to it, any physical card obtained will come with a QR code that can be scanned so that the same card may be inserted to your online game deck, bridging both physical and digital gameplay to form a complete experience that blends tradition and technology.

And if this isn’t enough to convince you of the benefits brought upon gamers by acquiring Elementeum (ELET), the digital token that will be used to conduct transactions inside of the game’s marketplace and matches, then we will have to keep listing other benefits:

Outside of regular game participation, matches and tournaments will yield rewards to participants and winners. Said prizes would be claimed in (or through) Elementeum. That means that owners of ELET will be able to enjoy a more rewarding and competitive experience.

Acquiring additional content to enhance your experience such as trading cards, skins or other digital assets will be available through the game’s marketplace. Purchase of said content will be made with ELET in the same way marketplaces work in other games.

All capital raised through the sale of crypto coins will give developers a higher budget to further update and develop Ether Legends, translating into a more polished and overall better experience.

People who participate in the token presale will receive a legendary collectable trading card (ERC721 Fungible Token) that is exclusive to those that participate in the ICO. Said card won’t be created again and is limited to one per wallet address.