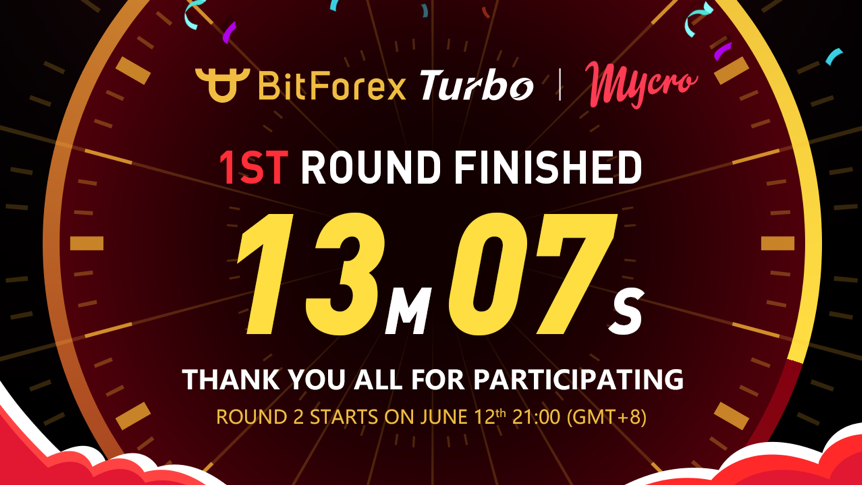 As with the preceding project, BitForex Turbo’s MYO token sale concludes within minutes on opening. In mid-April, BitForex launched their first project on Turbo, a platform aimed at highlighting noteworthy blockchain projects for the community to participate in with a fair distribution system.

Now, following the initial successes, BitForex Turbo sells out the first round of the Mycro MYO token sale in just over 13 minutes. Another round of this token sale will be starting on June 11th at 21:00 GMT+8, giving users an additional opportunity to secure tokens from this project at a competitive price.

Mycro is a platform that sets out to aggregate and list small jobs in local communities, enabling people to harness their time to make extra money by doing small tasks, or exchanging money for more personal time by posting their daily chores for other users to do.

This system is built on an integrated blockchain review platform, which allows users to earn verifiable and legitimate reviews for their services or job postings. These review profiles can then reportedly be transferred to other future projects — all in an effort to make a simple review as valuable as it can be. Users will be able to build up trust and reputation that cannot be taken away from them.

The project features MYO tokens at the core, letting users pay or be paid within the proposed Mycro job ecosystem. Mycro’s ICO was well reviewed, earning a 4.4/5 and a 9.5/10 from ICObench and ICOmarks respectively — two highly reputable ranking sites that have analyzed more than 3,000 cryptocurrency and blockchain projects. With the success of their sale on BitForex Turbo, Mycro further cements its stance as a cryptocurrency project with a strong team and vision, making it one to follow.

Since being announced in early April of this year, BitForex Turbo continues to prove that by bringing extra attention and care to worthwhile projects and backing them with the name of a trusted exchange, the cryptocurrency market is still rife with interested parties ready to purchase tokens for their chance at getting in on the ground floor of a project they truly believe in.

“We’re thrilled with the performance of Mycro on BitForex – It’s been a perfect starting point for getting MYO into the hands of passionate users” – André Bruckmann, Mycro Founder & CEO.

The 2nd round of Mycro’s MYO token sale on BitForex Turbo starts on June 11th, at 21:00 GMT+8, and will become tradable via an MYO/ETH trading pair on the BitForex Exchange platform on June 17th. To participate, visit the link below.

Catch all the latest BitForex news:

Founded in March 2018, BitForex is the leading destination for all cryptocurrency exchange services. As one of the largest and fastest growing cryptocurrency exchanges in the world, it strives to provide fast and seamless access to features catering to traders of all calibers. BitForex has operational teams in Hong Kong, South Korea, The U.S, and more — catering to 3+ million users from more than 180 countries trading 150+ different tokens for a total daily trading volume of over 200 million USD. BitForex is here to serve you — whatever your needs may be.