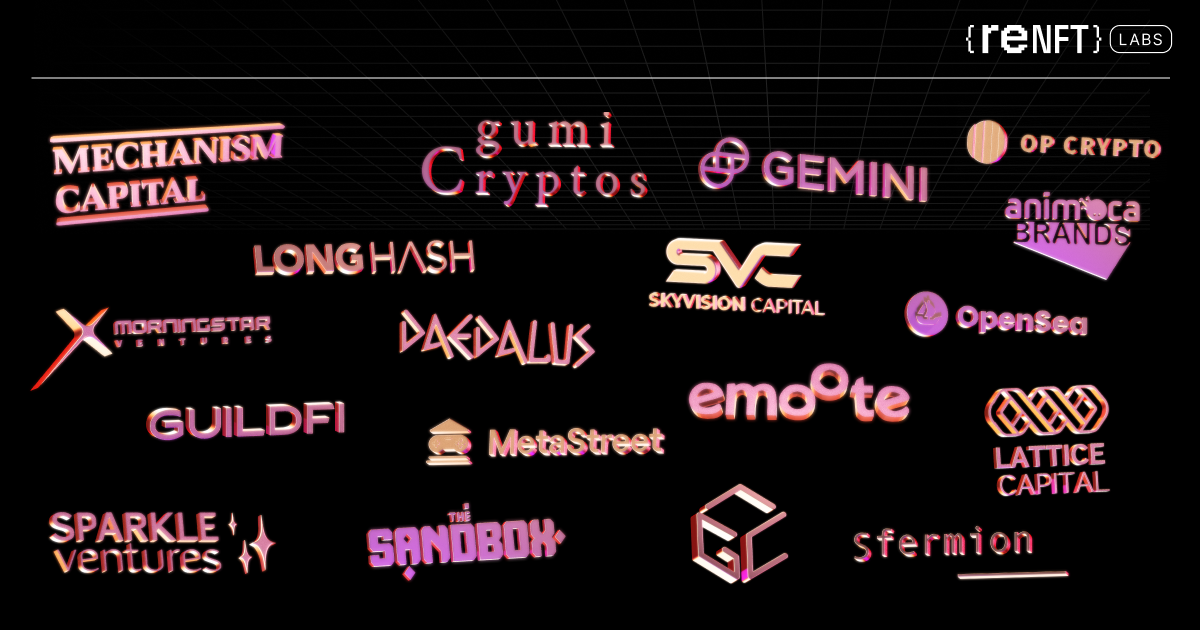 With its announcement today of a new strategic investment round, reNFT is positioning itself as the market leader in digital asset rentals in the global Web3 economy. This $5 million round co-led by Mechanism and gumi Cryptos Capital (gCC) will have an emphasis on investors who bring strategic value to reNFT as well as gaming guilds who represent millions of gamers globally. The funds will help reNFT to accelerate the pace of hiring, capture integrations across multiple blockchains, and extend their product suite.

As co-founder, Nick Vale, states, “Since our founding last year we have been thrilled with how our vision is resonating with the marketplace. There is a huge need for automated, trustless, collateral-free renting of digital assets such as NFTs to unlock new levels of economic activity in the Web3 landscape”.

The gaming use cases that reNFT is focused on are a priority because the gaming sector is leading the way in global adoption of NFTs which are not only collectible but include financial utilities. In recent months, the term “NFT” surpassed “cryptocurrency” in total global Google search volume as millions of people witnessed celebrities and athletes making high dollar purchases and sharing them publicly.  With more mainstream platforms set to launch NFT marketplaces in 2022, there will be millions more users participating in the Web3 market over the coming quarters.

Globally, the gaming market is one of largest markets in the world with 2 billion+ players and billions of revenue annually. New blockchain native gaming projects are launching daily and they all have a similar problem they have to solve: how do they enable the holders of their NFTs to generate revenue from their assets in a convenient and secure manner?  reNFT is solving this problem with one of its product lines which provides Web3 gaming projects with a turnkey whitelabel solution to integrate renting, lending and gamefi automation into their own proprietary marketplaces or ecosystems.

“Without a powerful rental primitive, NFTs are going to miss the mark when it comes to capital efficiency and ease-of-use”, stated Brian Fakhoury of Mechanism Capital. “Rather than depending on custom built logic, any project incorporating NFTs as a capital asset and gateway to their application should tap into proven infrastructure like reNFT. We believe that this has powerful downstream effects like better liquidity, stronger game economies, and a lower barrier of entry for new crypto participants. Nick and team have been at the forefront of mechanism design in this regard, and we’re incredibly excited to back them as V2 rolls out to a growing set of users.”

The impressive growth of web3 games such as Axie Infinity have been driven by, among other factors, the renting of in-game assets; however it’s being done almost entirely in a manual fashion via people serving in roles such as “scholarship managers”. By bringing reliable automation to what these scholarship managers do today, reNFT enables far more participation at a lower cost; reducing renting costs anywhere from 15-30% which means more of that revenue can go to the holders of the assets and the renters of them.

This trend of combining proven financial blockchain technology with gaming use cases has coined the term “gamefi” in the Web3 movement and reNFT is moving with its partners to become the leader across all major blockchains and gamefi ecosystems. Their collateral-free renting and lending tools are already completed on the Ethereum and Avalanche blockchains with Polygon and Solana releasing soon.

“We have already seen how fast the Web3 gaming market grows after bringing in renting and borrowing NFT asset mechanisms via guilds. However, guilds only opened a portion of the in-game NFT asset market as only the assets owned by guilds are available. Through reNFT, every single in-game NFT asset owner will be able to participate in this gamefi market, easily and directly, without collateral requirement or exposure to the risk of losing their assets. reNFT will unlock the full potential of the gamefi market aggressively.“ Rui Zhang, Managing Partner of gCC, said.

Following its $1.5 million round of investment last year, reNFT launched a v2 of its platform which will provide the foundation for all upcoming rental integrations. They provided a sneak peak to the new platform in a Twitter Post and dove deep in the Launch Article.

“Our team will continue to grow and expand as it has been doing”, shared co-founder Nazariy Vavryk. “This round will help us hire even more aggressively and add more people to an already very strong team. It will help us strategically deploy our human resource across a number of anticipated upcoming gaming and financial NFT related use-cases. We are very excited about what is in store for NFTs and we are here to build products for years to come”

While gaming is the top priority of reNFT right now, it’s vision for the future is much broader. It sees a world where any digital asset in Web3 with a rental use case will need a solution for trustless collateral-free lending. This includes any asset in the digital or physical realm so long as it is represented on the blockchain and this will include a wide range of assets such as intellectual property rights and physical real estate.

In addition to co-lead investors, Mechanism and gCC, this $5 million round also saw key participation from strategic investors such as Gemini, The Sandbox, OpenSea, Sfermion, Morningstar Ventures, EveryRealm, OP Crypto, Fourth Revolution Capital, Metastreet and others. The Web3 space has seen a dramatic increase in investments over the last year as it has continued its march into mainstream financial and consumer trends. Given all the interest that is has received, reNFT’s momentum is set to continue building throughout this year and into a bright future.