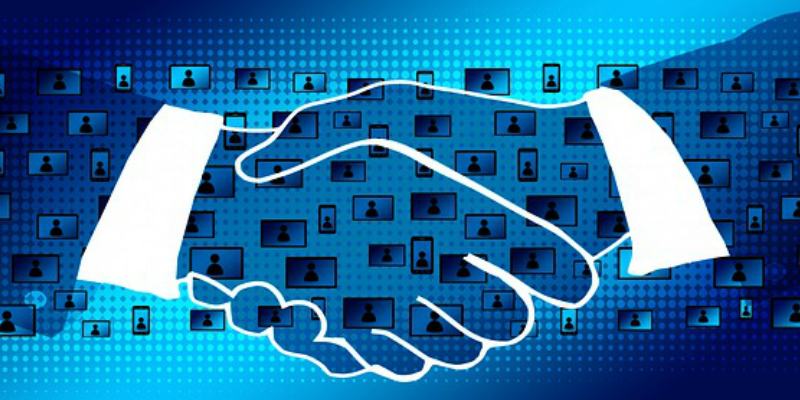 Data has become one of the most valuable currencies globally. Growing exponentially, accumulated digital world of data will expand from 4.4 zettabytes today to approximately 163 zettabytes (1 zettabyte equals 1 trillion gigabytes) by 2025. It is a foundation of new infrastructure, new business types, new monopolies, new politics and essentially new economics. Unlike any other resource, it is collected, processed, valued, sold and bought in various ways. However, compared to any other type of asset it is simply inexhaustible. Constant digital information inflows affect markets and their demands. Yet, the challenging question arises, who should own and take advantage of data?

Democratization of personal data has been occurring for a while now. Its sources derived from; fierce globalization which pushed companies to wisely use their scarce resources and finely tune their products and services for niche markets, digital innovations which allow businesses to collect data in real time, and finally the development of advanced algorithms that crunch the data. It is now an acceptable norm that customers exchange their data for free services. And yet, as reported by Richard Joyce, Senior Analyst at market research company Forrester, “Just a 10% increase in data accessibility will result in more than $65 million additional net income for a typical Fortune 1000 company.” In response, increasingly educated digital consumers are pointing into the reconstruction of digital data exchange in form of fairer treatment of the value of individual’s data.

Besides, data as equity, both business and customer ecosystems are hit by data breaches. These, are especially harmful to financial industry which is still regaining customer trust after the financial crisis in 2008. Experts from PWC claim that financial sector is continuously seeking for better data aggregation and transformation. For instance, there exist significant shortages in operational infrastructure as finance units persist maintaining fragmented systems and rely on temporary fixes. These improvised solutions, no longer support industry in lowering costs and improving quality. According to, marketing agency Digital Third Coast, knowledge employees devote 50% of their time on finding and correcting data and looking for confirmation from other sources for data they are unsure of. Along with data scientists who are spending 60% of their time on organizing data. And yet, year 2017 stroke the globe with significant data breaches both in terms of scale and sensitivity of data compromised.

One of the biggest 2017 cybersecurity incident hit global information solutions company, Equifax. It is estimated that data of 143 million US citizens was jeopardized. The breach exposed clients’ names, Social Security numbers, addresses and birth dates. Also, hacked was the credit card numbers of 209,000 customers. Couple months later, Equifax reported that data of approx. 694,000 UK consumers was also stolen, including financial information, passwords and partial credit card numbers of 15,000 UK customers. The incident was followed by company’s disclosure for $1.8 million.

Later the same year, one of the “big four” accountancy firms, Deloitte faced cyber-attack that compromised emails and confidential information of company’s important clients. The hackers broke into the firm’s global email server via ‘administrator account’ while the company was migrating its email from an in-house system to Microsoft cloud-based Office 365. Compromised server contained emails of around 350 clients, however Deloitte claim that information of only six clients was jeopardized.

Following the increasing number of data breaches every year, affected businesses face major consequences. They entail financial repercussions, fines and reputational damage. According to IBM and Ponemon Institute average total cost of data breach amounted to $3.62 million in 2017. And, average total cost of one record stolen or lost, enclosing confidential and sensitive information accounted for $141. The study, also reveals the four major factors influencing the cost of data breach. Two of which increase the cost per compromised record, are compliance failure and extensive use of mobile platforms. And the remaining once which decrease cost, are better usage of security analytics and CPO appointment. Taking into consideration presented facts, a certain question comes to mind, are businesses able to find and implement solutions that will prevent putting data in jeopardy instead of mitigating the consequences of its occurrences?

Steady and inexorable occurrence of new technologies are definitely on the rise. Year 2017 was dominated by Internet of Things (IoT), augmented reality (AR) and virtual reality (VR). However, are new solutions always the first one to be tested and used by businesses? What about technologies that have been already available but had not had application to take advantage of them commercially? Emerging challenges around data storage, data management and data ownership are bringing back the significance of technology called blockchain.

As trends are heading towards heavier and data-centric ways of performance, businesses are developing and introducing more data-driven platforms, applications and ecosystems. These approaches created a need to devote a lot of effort to provision databases in storage and power. Such huge commercial dependency on data found its place in centralized data centres. They are providing maximum data integrity and decrease data redundancy, however, are vulnerable to compromising all stored data in case of security breach. To mitigate the risk of data exposure, businesses are entering the phase of adopting decentralized solutions built on blockchain technology.

Complete Technology or One More Way of Data Management?

The blockchain-based solution allowed to form an infrastructure composed from two major stages. The first one, involves portioning databases along logical lines. These portions are then stored together and accessed by decentralized application applying a unique partition key. The second phase, consists of utilization of large group of nodes, similar to how blockchain is utilizing a network of nodes. Such complete solution improves speed and decreases latency by retrieving data in parallel from the closest and quickest nodes. What distinguishes the whole concept is the ownership of devices and data which are not possessed by single entity but are managed by individuals. In this way, customers will have a chance to regain control over their data and establish fairer system of exchanging personal information commercially. Based on the movement towards blockchain-based inventions, the last question remains, are there already companies that deliver such high-end services and are ready to provide the ecosystem for data exchange, management and storage?

Responding to market needs takes time, however businesses and individuals can already take advantage of complete services provided by both existing and new players. Here are two examples of new entrants which leveraged available technologies based on cryptographic and blockchain, as well as took one step further in expanding their scope of vision to provide exceptional developments.

Creditor Data Platform, was created to make a revolution on data processing market. The platform aims to address major challenges such as poor data flow, underestimation of data value and data breaches. The underlying mechanism of data exchange allows all users of the Platform to receive their respective benefits. Data providers can have a reward for provision of their information and trace its movement, data buyers can use authentic information of target groups they need and run their business without losses caused by poor data, and finally data verifiers can receive a reward for data validation. Based on the blockchain technology, data circulation process is secure and decentralized. All data is processed in an encrypted form, validity of transactions is ensured by consensus mechanism and all users of platform contact with each other through peer-to-peer network.

Another example, is digital identity platform of Civic company that takes advantage of public blockchain which allows them to decentralize hashed information and provide interoperability. An individual sign up to an app which gather personal information. Data is then processed by government institution or other third-party verification agency. After authentication process is done, Civic grabs cryptographic hash of all information set and places it in public blockchain. Later, Civic removes data from its servers. Then, whenever a person desires to authenticate to use various services, he simply is able to share required piece of information which is then send via Civic’s algorithm to verify it against hash on blockchain. And again, once the service confirms authenticity of the individual’s data the service using Civic no longer is required to store the information. The greatest benefit of such ecosystem is data being stored only on person’s desired device and hashed data not being centralized anywhere.

Viktor Ihnatiuk has 6 years of entrepreneurship experience. In his 23 years he achieved a lot: founded peer-2-peer lending platform uCredit that was acquired in 2016, was hired as a CEO of Boxdrive — one of the first companies that operates in decentralized cloud storage market. After he left this company, he established Creditor Platform and joined a development team in Storj Labs — one of the most famous blockchain companies worldwide that established decentralized cloud storage platform.

Creditor Data Platform (https://creditor.ai/) — is a decentralized personal data marketplace that creates a transparent and mutually beneficial exchange of data between individual data owner (like, me and all other individuals) and data purchaser (commercial companies who are looking for additional source to acquire the data). It is a platform that is built upon blockchain technology empowering individuals to control, trace, and be rewarded for sharing their data. Such a solution gives the opportunity to receive a reward for providing personal information, to access the authentic verified information, and for businesses to mitigate risk against poor and faulty data by using crowd verification mechanism inside.

Creditor is the finalist of Benzinga Global Fintech Awards. Creditor team has already participated in 4th Batch of Starta Accelerator — New York based startup accelerator, that is administered by Starta Capital (fund raised $5,000,000 through the ICO last July).

Creditor raised it’s last round of investment from Nova SBE Venture Lab, VC from Nova SBE — the largest Portugal Business School. Our team has a significant experience in blockchain and fintech space, working in one of the most well known companies like Storj.io and Oracle.