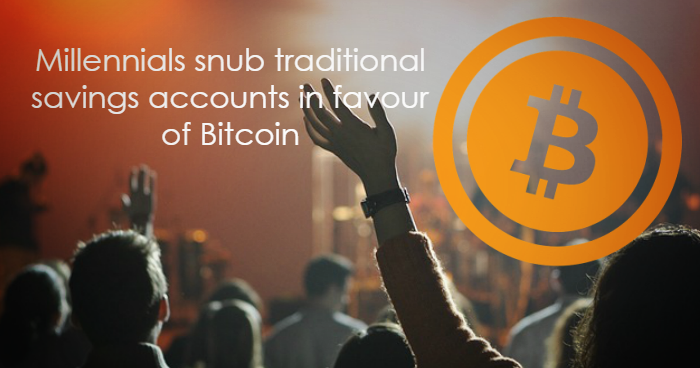 A growing number of millennials are putting their savings into Bitcoin instead of traditional bank accounts, with 6 out of 10 respondents stating they have purchased Bitcoin in the last 12 months.

Out of the 10,000 millennials who were included in the survey conducted by https://coinspectator.com/, 70 per cent said they were unhappy with the interest rates offered on their savings accounts, and nearly 65 per cent said they felt their money was safer in Bitcoin, which they controlled, rather than it being controlled by a bank.

Recent banking figures show that savers receive just £10.06 billion of interest collectively when compared to the £1.3 trillion they were putting away. Bitcoin on the other hand has risen in price from approximately £550 in November 2016 to nearly £6,000 at the time of writing. With such lucrative profits up for grabs, millennials fear missing out not only on making high gains but also on the opportunity to support self sufficient banking that benefits the user directly.

Almost two-thirds of women said they have started to branch out from Bitcoin and diversify their portfolio by investing in other cryptocurrencies This comes as no surprise given women are often underpaid in the workplace in comparison to men, leading to them taking riskier investments to accumulate the same level of wealth.

Although millennials prefer saving in Bitcoin, just under half are also on the lookout for a more convenient banking system with 45 per cent stating they hoped their bank would integrate Bitcoin wallets so that they could invest directly in digital currencies through their current banking provider.

70 per cent were unhappy with the interest rate attached to their savings account, while 75 per cent felt they were being robbed of their money and not valued as a customer.

In the next five years the majority of millennials will put approximately two thirds of their savings into cryptocurrencies, resulting in a revolution among the younger generation who are financially savvy and independent of any centralised financial institution.

“The younger generation has been notoriously quicker to act on new technologies, including the latest smartphones, which have enabled millennials to invest in Bitcoin over the last few years, before large hedge funds and financial institutions started to get involved,” said Andrew Sung, founder of CoinSpectator.com.

With banks providing such low interest rates on customer savings, accounts are becoming a thing of the past for the younger generation. With Bitcoin, people have full control over their money, make far greater profits and above all can send money abroad with lower transfer fees.

Have you purchased Bitcoin in the last 12 months?

10% of respondents said They were unsure what Bitcoin is

Are you unhappy with the current interest rate offered by your savings account?

10% of respondents said No

Have you also invested in other cryptocurrencies such as Ethereum?

35% of female respondents said No

75% of male respondents said No

Do you feel that your savings stored in Bitcoin is safer with you as opposed to keeping your savings in a bank account?

30% of respondents said No

20% of respondents said No

Do you feel that the bank is not valuing you as customer with such a low interest rate?

21% of respondents said No

In the next 5 years how much money do you plan to invest into cryptocurrencies?

CoinSpectator is a real-time cryptocurrency news aggregator allowing traders, investors and enthusiasts to keep up-to-date with the latest news.