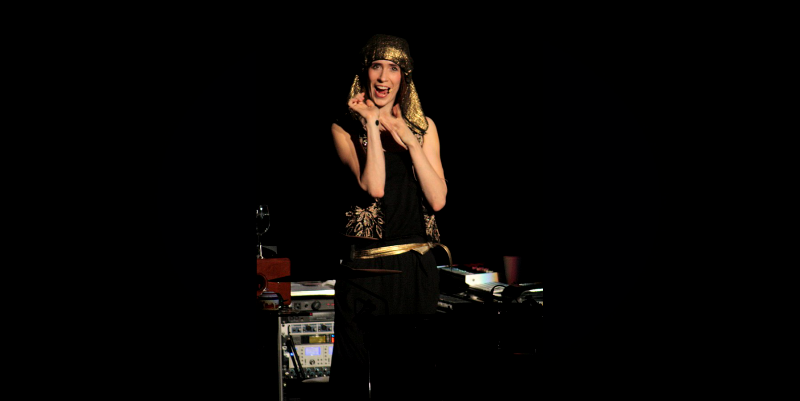 Electronic music visionary, Grammy award winner, and song siren Imogen Heap has joined a number of musicians who are finding new ways to make use of blockchain in marketing new music. She recently held a small acoustic performance at a former nuclear bunker located in Stockholm, Sweden, which the BBC reports came with a unique digital twist.

Apart from enjoying this rather intimate performance from one of the most innovative vocal performers of our time, 150 audience members are also slated to earn from the performance as well. During the concert, one of her songs was recorded live. This is not unusual for concerts, except that within that song’s digital code was a digitally embedded, and indelible, contract that ensures that those 150 members of the audience will get a cut of the song’s future royalties. True to her nature as an innovator, Imogen Heap offered ticket holders this unique chance to be part of a unique blockchain-based contract, revealing yet another way that blockchain can forever change the music industry.

It’s not the first time the two-time Grammy winner has used blockchain to shake up modern music. Heap is also the main driving force behind Mycelia, a blockchain-based platform that aims to help musicians retain ownership of all their work, manage how their work is being used, and ultimately ensure that the artists get their fair share of revenue. This has resulted in the Mycelia Creative Passport, which Heap described on Forbes as “a peer-to-peer verified digital identity standard which holds verified profile information, IDs, acknowledgements, works, business partners and payment mechanisms, sharing skills and projects to find our champions, fans and collaborators.” In short, it can theoretically allow musicians (and everyone involved in making the music) to self-govern, manage, and earn a fair living for their hard, creative work. “It’s about convincing the music makers to claim the space which is theirs.”

This relates to one of our previous discussions here at Coin Announcer on how enterprise blockchains can prevent falling into a dead-end. Instead of simply turning into software companies that replace intermediaries such as banks (or in this case record labels), blockchain-based technology has the potential to go much further. In fact, the music industry is not alone in embracing the new business models that are now possible through blockchain.

Although we are only at the beginning of the entertainment industry’s adoption of blockchain, already there are signs of how the new technology will completely change how art is consumed and viewed. For fans this means a much better service at music venues, or any other venue for that matter, where secondary tickets are sold at much high prices. Bitcoin Magazine reports how ticket sellers will sell 80% of tickets to an umbrella sister site for a higher mark up. This can be reduced by fans using blockchain, as each ticket will be verifiable, and “it locks and guarantees the value of the ticket that is unmatched by private databases and paper systems”. This is a level of security and customer confidence that is already being examined by the other sectors of the entertainment industry.

One such sector is the casino industry, where music concerts are frequently held to provide musicians with various opportunities for regular performances. Coinwire’s overview of cryptocurrency in the casino industry details how the use of digital currencies (instead of fiat money) will improve the experience in various ways. Apart from the accountability and security you can expect from distributed ledger technology, cryptocurrency use in casinos offers players the ability to play without any “middle men” in the form of a payment processor or third-party credit company. Like the venue tickets, this will ensure a faster and more secure form of payment. And that is only start, with films now being funded by cryptocurrency as an alternative to the traditional studio system, it is clear that the entertainment industry has a lot to gain through blockchain.

As the world’s most creative engineers and entrepreneurs continue to move towards fairer and more efficient ways to do business, we can expect even more aspects of the entertainment industry to follow Heap’s lead.

How Blockchain Technology and Artificial Intelligence are Revolutionizing FinTech

Can blockchain solve the IT talent crisis?