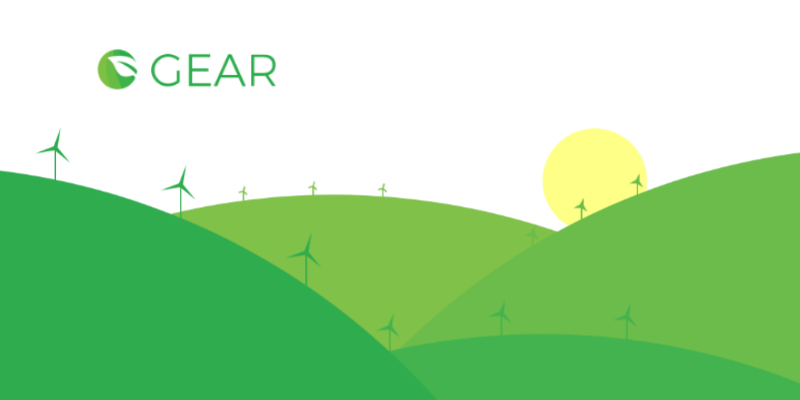 You’ve obviously heard of cryptocurrencies and cryptographic tokens. They are all the rage in the world right now, and for good measure too since they have managed to bring about nothing short of a revolution in the financial sector. Now, what if we were to tell you that there’s a kind of cryptographic token that runs on green energy and is in fact renewable?

Yes, you read that right. This dreamlike product is actually a reality and is called Gear. With the focus on environmental stability, Gear promises to mine for cryptocurrencies in an ethical manner and also utilize green energy mining facilities for the same.

Gear, as stated is highly enthusiastic about the environment and is in fact fully compliant with ERC20 and SEC. Among the many programs that Gear hosts, notable are the Gear Earn, which lets token holders gain access to an income stream coming from the network annual net proceeds and Gear Capital, which enables researchers and technicians gather investments in research and development programs.

When we talk of cryptocurrencies and the blockchain, we often talk of how amazing they are and how easy it is to carry out transactions using them. And for good reason too, since these new technologies have effectively managed to completely change the way we think about online transactions.

And yet one aspect that we often tend to overlook is how much energy they require. To overcome this problem, the team behind Gear worked tirelessly to develop a platform that is energy efficient and yet profitable at the same time.

Gear token is currently being helmed by the President of the company, which is Indi Pathak, who is ably supported by the Vice President, Vik Pathak. Gear is also backed by elite advisory board members;

The Gear Token is the cryptocurrency which drives the Gear project. All transactions in the Gear platform is facilitated through Gear tokens. These tokens are also used to raise funds. The proceeds of the Gear token ICO will be spent on buying mining equipment (65%), Development of mining facilities (30%) and other business aspects (5%).  The rewards to the users will also be distributed in the form of Gear tokens. Anyone can be an investor in this project by owing Gear tokens.

If you are interested in buying Gear token tokens for yourself, and frankly you should be, then you must know that a total of 200 M gear tokens will be made available for sale and the production cap has been set at 294,117,647. The lock-up period has been decided to be the 31st of December 2018 and any tokens which are not sold until then will be destroyed.

The noteworthy point about the makers of Gear token is that they understand that mining for cryptocurrencies is currently a pretty energy consuming and somewhat non-profitable process. To counter that, mining farms are now being placed and set up at locations where electrical costs happen to be at the lowest. Also, to further enhance the investors’ experience, the company will not just provide reinvesting, but also share dividends with token holders, thereby making it pretty obvious that the tokens will rise in value.

Even after all of its security measures and accidental covers, the customer needs to understand that Gear is still a profitable organization that hinges and relies on the complexities of the market at any given time.

While you make good profits at a certain time, the situation could in fact also be changed drastically if the market starts performing badly. Gear token does not guarantee a profitable situation. It is up to the customer and the users to evaluate and look over the risks and outcomes of investing in Gear tokens.

433 Token, will make Soccer more fun for everyone in the world

How Raintoken Is Transforming The E-Commerce Industry