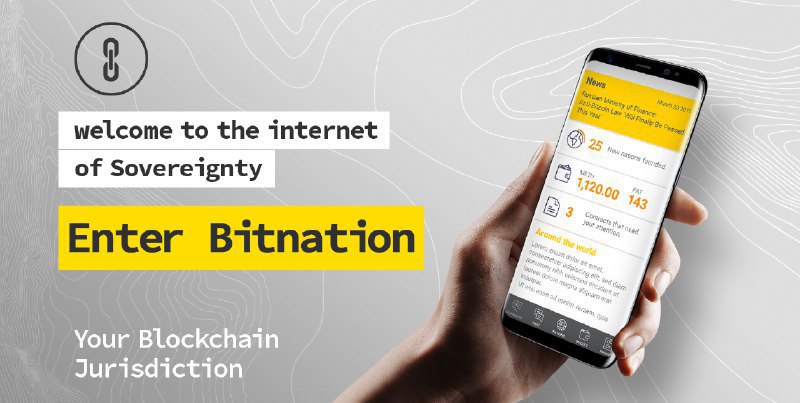 Technology is gradually but definitely transforming the world into one global community. A community where its citizens are compelled to compete with one another other for the governance of their choice. BitNation aims to put citizens in total control by providing governance services to the people and developing a free marketplace where Voluntary Nations, City States and Autonomous Communities compete for citizens.

BitNation is a proof-of-concept Decentralized Borderless Voluntary Nation (DBVN) that provides a platform to help users conduct peer-to-peer arbitration and create new nations. Its services are enabled by Pangea, a user-friendly decentralized ecosystem and mesh network for opt-in jurisdiction for citizens accessible via a smartphone-chat interface.

The Pangea Jurisdiction is powered by an Ethereum based blockchain agnostic smart contract functionality. On the platform, people are at liberty to choose whatever nation they wish to belong to. The platform will also help with the development of DVBN and execution of P2P agreements as well as with dispute resolution.

Users can either chose to be an arbitrator in their field of expertise or they can hire one to serve the purpose. Arbitrators have the right to choose the Code of Law and Decision-Making Mechanism, write a constitution and provide governance services to citizens. Other than the Pangea jurisdiction, BitNation also offers the BitNation Blockchain Public Notary and the BitNation Refugee Emergency Response (BRER). The former will be responsible for providing birth certificates, marriage certificates, freelance agreements, company registrations, wills etc. The BRER, on the other hand, will provide Blockchain IDs for stateless people.

Pangea Arbitration Token (PAT) is an ERC20 standard native token of the BitNation platform which will be used to facilitate all in-app transactions. PAT tokens as reward tokens are distributed based on a user’s performance, rather than in-app popularity or purchasing power.

BitNation is holding an ICO to create awareness and raise funds towards the development of the project. An issuance amount of 42 billion PAT was created by the team while 34% of the token total were released for the ICO. Another 34% was allocated for Pangea citizens, 18% went to the core contributors and the remaining 14% was set aside for future contributors. The accepted means of exchange in the token sale are Bitcoin, Ethereum, and Dollar with the hard cap fixed at 30 billion USD.

The ICO of PAT is in 3 phases; the first phase was concluded in December 2017 with a 15% bonus token allocation on all purchases. 10% of the token supply were sold in this phase. The second phase of the ICO, being the main token sale is currently live. It started on the 25th of March 2018 at 3pm UTC and will end on the 24th of April 2018, running for a total of 30 days. The first power hour of this phase had a 15% token bonus for all investors within that period. The minimum contribution is set at 0.05 ETH. Referrer and referee in this stage both get a 2.5% bonus for any contribution they make. The final phase is basically the release of unsold tokens from the ICO for sale in cryptocurrency exchanges.

As at the time of this report, there was no information from the BitNation team concerning the financial status of their ICO. However, funds realised from the ICO are expected to be shared thus;

The BitNation team is a group of global developers with experience and expertise in their respective fields eager to create an impact in the blockchain ecosystem. BitNation was founded on July 14th, 2014 by Susanne Tarkowski Tempelhof and James Fennell Tempelhof currently serving as the CEO and COO respectively. The rest of the team comprises of 24 members from varying fields of expertise including software engineering, blockchain development, marketing and communications.

Essentially, BitNation is a decentralized marketplace for legal services. So far, the platform has over 15k citizens with 500k registered nations. Loaded with potentials of providing an efficient problem-solving ecosystem, BitNation is currently one of the greatest ideas of blockchain industry. Visit their website here for more information on the network.

Find out more on: https://tse.bitnation.co/

Yumerium – A New Era of Gaming on Blockchain