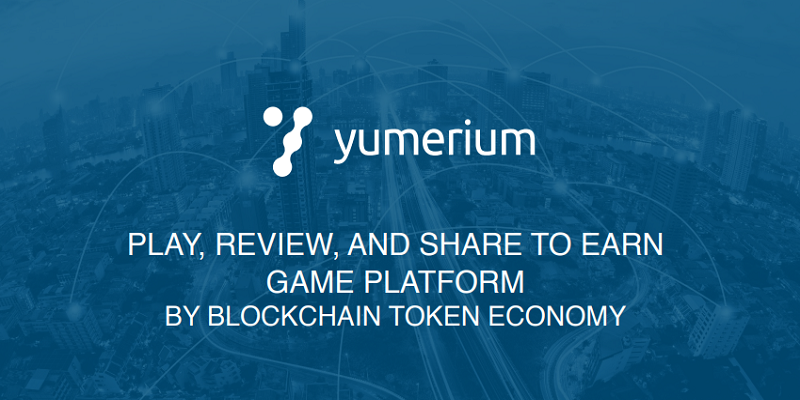 Gamers are the backbone of the gaming industry. They play, share and review games just for the fun of it, more often than not. Without the activities of these players, the industry wouldn’t have registered as much success and growth as it has in the past years. Now how does Yumerium come into all of these?

What is Yumerium?
Yumerium is a blockchain based open gaming platform that offers gamers an opportunity to make money through playing, sharing and reviewing games supported by the platform. By incentivizing players to continue doing what they already love to do for free, Yumerium will directly encourage new gamers to join the platform while simultaneously encouraging the old timers to stay longer to keep doing what they love to do. These gamers will be incentivized using the Yumerium tokens known as YUM.

Yumerium Token
Yumerium Token denoted by YUM is the native cryptocurrency of the Yumerium platform. The token is essentially the ‘gas’ that powers the entire platform. The game developers will reward the gamers on the platform for their activities with YUM tokens. These activities could range from playing the gamers, leaving favourable comments and feedback about the game online, sharing it on other social media platforms etc. The game developers determine what is rewardable and the amount of reward to credit to its users. The gamers in turn spend the money on in app game pieces and game money. The developers can also provide a bonus system for the players for promoting and making their games popular.

Subdream Studios, the company under which Yumerium is registered and licensed, in collaboration with VR Plus, a gaming platform have already integrated 4 games on the Yumerium interface – Dream Pets, Mega Overload, Kingdom Watcher and Hell Dimension. CryptoMine will be the first ever game unique to Yumerium. It is currently still in development, launching and implementation is scheduled for sometime in the third quarter of 2018.

ICO of YUM tokens
Yumerium is still in the development stage and like most cryptocurrency based projects, the platform is holding an ICO to raise money to further the advancement and development of the platform. The hard cap is fixed at 316,906,850. Accepted currencies in the token sale are BTC, ETH and USD at a token price of $0.1 per YUM. 50% of the total issuance amount is set aside for the token sale, the remaining 50% will be shared thus;

The ICO of  YUMtoken is in two stages – the presale ICO and the main public token sale. The pre sale will run from April 22 to May 12 2018 while the public sale will run for 7 days from May 13 to May 19 2018. The total sale will run for 4 weeks altogether, the first week with a 30% bonus, the second week a 20% bonus, a 10% bonus in the third week and a 5% bonus in the final week. The tokens will be credited to the investors’ cryptocurrency wallet 30 days after the ICO. The proceeds from the ICO will be shared thus;

Yumerium Team
Yumerium is the brainchild of Jikhan Jung (Founder & CEO), Francisco Martin (Co-Founder & CTO) and Jaeheon Kim (Co-Founder & COO). Yumerium was developed by the founding team as a project under the Subdream Labs, a subsection of Subdream Studios, a gaming company based in the US. The founders are supported by an efficient development team along with an impressive advisory board. So far, the team has successfully raised $2.2M from marquee investors globally.

Final Thoughts
Yumerium is on a mission to disrupt the gaming industry with the blockchain technology and smart contracts protocol. Yumerium is a revolutionizing concept that will change the landscape of video gaming forever when it is fully implemented in the system. Follow up the platform for more information and updates via their website here.