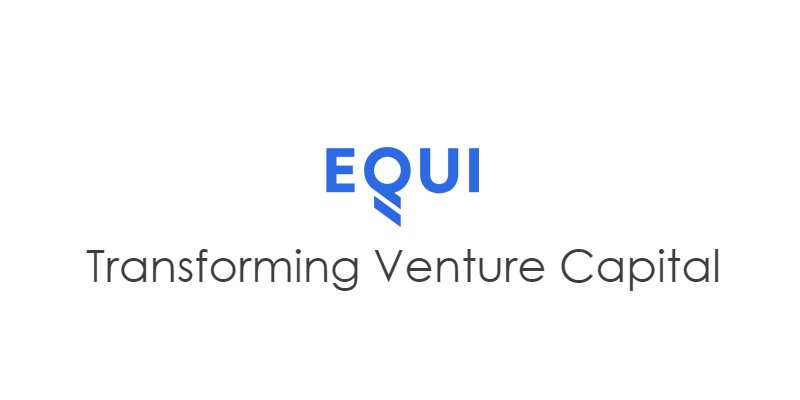 The blockchain had been implemented in several industries since its foremost application. Recently, the blockchain with its decentralized and trustless framework has made its way to the Venture capital industry in the form of EQUI Capital.

EQUI Capital is a project with the primary goal of providing a link between cryptocurrencies and the traditional venture capital markets in such a way that the two concepts are completely merged into a single framework. EQUI is based on the Ethereum network of the blockchain technology. EQUI also adopts the smart contracts protocol of the blockchain to guarantee the transparency and security of information stored on the blockchain database. From distributions to transactions to users’ investments, EQUI ensures that information is distributed and incorruptible.

The platform will serve as a portal in the investment world to offer support to new and upcoming innovators. EQUI will further assist and support these innovators by providing extensive business knowledge and guidance to enable their businesses to flourish. In essence, EQUI is a token based platform that will connect innovative technology start-up projects to potential and interested investors. EQUI Capital will be powered using a digital token known as EQUI tokens.

The EQUI token is the token that powers the EQUI Capital platform. EQUI tokens are standard ERC-20 complaint token of the Ethereum blockchain created for use solely within the platform. EQUI tokens grant token holders access to the EQUI’s services where they can be spent or earned. Start-ups, small and early-stage companies integrated on the platform will be allocated EQUI token to facilitate their businesses. These funds so allocated will be from the donations of token holders of EQUI tokens interested in investing in the business. The investors will, in turn, receive a share – 5% in proportion – in the future profits of that enterprise, via a loyalty program set up by the platform to encourage active participation in the system.

The EQUI Tokens were set up for sale in an ICO in exchange for more established currencies to generate funds for the project to enhance the development of the technical and business aspects. A total of 250 million EQUI tokens were created by the EQUI team for the ICO, out of which only 65% are available to the public for the ICO. the remaining 35% were distributed like;

The accepted coins in the token sale include Bitcoin (BTC), Ether (ETH), Ripple (XRP) and Litecoin (LTC). The tokens will be sold at a starting price of 1 EQUI to $0.50.

The EQUI ICO is in two stages; the pre sale and the main ICO. The EQUI pre-sale started on March 1, 2018 and ended after 15 days on March 15. A minimum investment of $100,000 was required to participate in the pre-sale which offered a 25% token bonus for all investments. The main ICO started immediately afterward, on the 15th of March 2018. A minimum investment of $100 is required for participation in the main ICO. Investors in the first week from March 15th to March 22nd received a 15% token bonus while participants from March 22nd to March 29th received a 5% token bonus. Investors from March 29th, are not eligible for the bonus program. This phase was originally scheduled to end on the 12th of April 2018, however, the team shifted the token sale all through till June 30th 2018. In other words, the main ICO is currently ongoing and will be in operation until the end of June.

The distribution of the funds from the token sale will be split into several different pools:

Based on a report published on the website, so far, the team has successfully raised over $7,000,000 USD. Other than that, there has been no further update on the status of their ongoing ICO.

EQUI was founded by Doug Barrowman, the lead founder and Baroness Michell Mone of Mayfair OBE who joined the project as a co-founder. Barrowman has over 30 years of extensive experience in the investment industry including entrepreneurial experience gotten through the creation of startup companies including the Knox Group of Companies from the parent company – Aston Ventures, under which the EQUI Capital project is registered. The Baroness is an influential award-winning businesswoman in the UK with an impressive portfolio in the cryptocurrency industry and in entrepreneurial investments.

Aston Ventures was founded in 1999 by Barrowman and has recorded great strides in business. Over the years, the company has made 13 acquisitions and is now worth over £400 million GBP. The two co-founders are supported by a team of investment professionals and advisors working hand in hand to validate the vision of EQUI Capital.

With the implementation of the blockchain, EQUI is set to disrupt the venture capital industry as we know it. The platform provides its users with a range of professionally executed solutions on how to handle investments and startups. Granted, there are potential risks associated with every business, thus, the platform encourages diversification, investing in multiple projects to spread out the risk factors. EQUI seems like the ultimate all-in-one solution to the venture capital industry and it is an exceptional project for anyone looking to make an investment. Check out the website here for regular updates and more information on the EQUI Capital project.

XYO Token – One of the Tokens you will be happy to have in your Portfolio, Join the ICO!

Yumerium – A New Era of Gaming on Blockchain