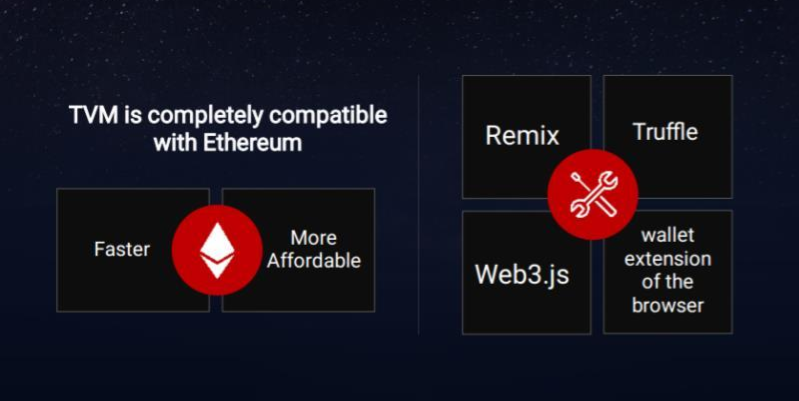 The TRON Virtual Machine (TVM), a significant milestone in the history of TRON public chain development, was launched and has completed its MainNet upgrade on August 30, SGT. As the key channel that connects DApp developers and users, the accelerated launch of the TVM suggests a wider variety of smart contract applications, more space for imagination as well as more feasible rollout plans. Meanwhile, TRON’s DApp ecosystem will no doubt witness a more promising future ahead.

MainNet launch, declaration of independence, BitTorrent acquisition, SR election, TVM launch…… All these have shown that TRON is taking a steady lead in the public chain race in 2018. Every move testifies for the continuous expansion and reinforcement of its ecosystem. The official launch of the TVM indicates the full opening of the DApp ecosystem.

The TVM can meet the requirements of TRON DPOS consensus mechanism, and on top of that, it can be integrated seamlessly into the existing developer ecosystem. Improved and innovated based on the EVM , the TVM is lighter, more secure, more stable, more compatible and more developer-friendly. Apart from these, the TVM has introduced the concept of bandwidth, which means that developers can transfer and execute smart contracts in TRON’s system for free.

If we see the underlying public chain as a virtual computer, the technology innovation and development based on this computer are diversified and multi-form. As a result, future blockchain VMs will exist in various forms as well, requiring more convenient communication between different VMs. As the center pillar of the public chain middle layer, the TVM is already compatible with the EVM in the early stage. It will be continuously made compatible with EOS and other mainstream VMs in the future.

Developers can develop, debug, and compile smart contracts in a familiar Remix environment using programming languages such as Solidity without learning new programming languages. In addition, the TRON team adopts the more globally popular Java language as its contract language and adopts Google Protobuf. Protobuf naturally supports multi-language extension and is more scalable, complex and extensive. Developers can also use the simple API interface for DApp development. Developers who are good at application development but less familiar with blockchain technology are no longer bounded. Instead, they smoothly transit and focus more on the logic of contract code itself.

By innovating and improving the operating environment of the TVM, TRON increased the threshold value of DApp development groups in different fields and strengthened the support ability of the public chain for smart contract applications. This will pave the way for smart contract development in the next stage, as well as providing more mature developing conditions for expanding TRON public chain ecosystem.

The MainNet launch, TVM launch, and DApp ecosystem layout are three key thresholds to building public chain. TRON has been leading the first tier of public chain in every step and it has ascended to be a true star project in the process of breaking through. As the most promising public chain that may overtake Ethereum, once again, TRON has launched the third battle on the public chain DApp ecosystem, aiming for more application landings.

It is true that VMs have blazed a new trail for the blockchain industry. Smart contracts are closely knitted with VMs. This means if there is no VM middle layer in the public chain infrastructure, DApp developement and ecosystem construction is not possible. Public chains will also lose their true value.

Rooted in the TVM, more diverse business logic can be successfully executed, integrating different business scenarios from various industries. This will extend the blockchain technology to the real economy, which can increase the possibility of commercial application from more dimensions.

Since its launch, the TRON MainNet has been running safely and steadily. Compared with Ethereum, the TRON network has about 2,000 TPS, 100 times that of Ethereum. TRON is aiming to reach 10 million, or even 100 million daily transactions. Network congestion was solved; high concurrent bearing capacity was significantly increased; the MainNet is compatible with all kinds of token ecosystems; the performance of the TRON platform is relatively complete, well ahead of other public chains in the same tier.

However, the underlying technology alone is not enough for building a good DApp ecosystem. Similarly, it is difficult for it to land without users, which is an important battlefield for public chain. TRON already has nearly 2 million global community users; it has gained another 1 billion registered users with the BitTorrent acquisition. Its huge natural user pool means that BitTorrent will be the largest application in TRON’s ecosystem. It is estimated that at least 100 million BitTorrent active users will join the TRON network. No other public chain in the world that can be compared to TRON in either public chain technology ecosystem consolidation or the community ecosystem user base.

The prelude of TRON’s DApp ecosystem plan was played at the right moment. In fact, as early as its declaration of independence, TRON’s DApp BU was already busy planning the development and application of DApps. The success of CryptoStrippers, a self-developed blockchain experimental game, is significant to TRON’s pilot DApp application development and continuous improvement of public chain performance. The game is also a forward-looking attempt to enrich TRON’s DApp ecosystem plan and to get a better place in the blockchain race.

In a recent interview, Justin Sun, founder of TRON, revealed that when both the TVM is launched and the MainNet is upgraded, all the application data on the TRON network can be tracked through Tronscan. In September, we shall witness a thriving TRON ecosystem and a new era of mass technology application in the blockchain industry.

Moving on, TRON will also consider further optimizing TVM based on WebAssembly (shortened as WASM). When applied to blockchain, WebAssembly can improve the performance of web-based DApps. The TVM that integrates WASM will meet the high performance and high throughput requirements for the integration between more complex business demands and blockchain applications. Together with global DApp developers, let’s TRON to the future!

5 Undervalued DeFi Gems to Keep an Eye On

5 Undervalued DeFi Gems to Keep an Eye On